If you're considering home security cameras, you'll need to decide between the two main types: wired and wireless. There's a lot of confusion around these two types of cameras. In this article, we’ll help you understand the differences so you can decide what will work best for you, whether you're just looking for a few cameras or an entire home security system.

The term "wireless" refers to how a camera communicates, not how a camera is powered. Wireless cameras communicate over Wi-Fi, whereas wired cameras use wires to transmit their footage. Wireless cameras can be powered by AC power (such as a normal household outlet) or by batteries. When powered by batteries, a wireless camera becomes a wire-free camera. Here is a simple explanation of the three terms, which we'll explain further below.

Wired: connected to a power source and the internet by a cable

Wire-free: wireless cameras connected to the internet over Wi-Fi and powered by batteries

What Are Wireless Home Security Cameras?

Wireless home security cameras generally store their footage on a cloud server, so you can access it from anywhere. Some also can store video on local media, such as a micro SD card in the camera. Wireless cameras are popular because they're easy to install and it’s simple to view their footage using a smartphone or computer.

Wireless security cameras generally record when they detect motion or sound, but some can be set to record 24/7 if plugged into power. They capture high-resolution video and can record at night if equipped with night vision. They also typically have two-way audio capabilities so you can talk to the person that the camera sees. Finally, some models use machine learning, a technology that allows cameras to do useful things such as alert you when they detect a person or package.

What Are Wired Home Security Cameras?

A wired home security camera system, also known as a DVR (digital video recorder) security system, is a recording device combined with cameras. The number of cameras usually stars at four and can go up to 16. They record 24/7, can be connected to the internet to view remotely, and are hardwired to the internet and to power.

There are two types of wired home security camera systems: traditional DVR systems that use a coaxial cable to power the cameras and record the footage, and newer NVR (networked video recorder) systems, which use ethernet cables to both powers the cameras and record video. Both DVRs and NVRs can connect to the internet via an ethernet cable. NVRs are more advanced and capable of recording higher quality video than DVRs. NVRs also can incorporate some features that wireless cameras have, such as two-way talk and person detection.

The cameras that come with a wired home security system draw their power from the DVR or NVR and don’t need to be plugged into an outlet. Most wired systems have an app for viewing footage on your smartphone, but you can also connect a computer monitor to the recording device to view the recordings and real-time feeds. 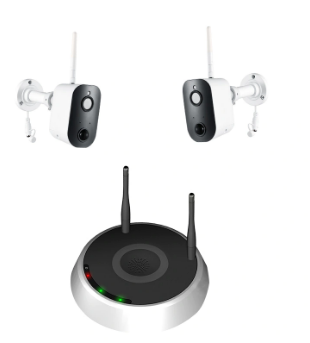